You can also get it on Amazon at this link and get your own Rock On Ruby custom art by using a Sound Wave Generator from SoundViz.

This Soundorabilia Fancy Dresses item will be delivered to your door Worldwide from UK. Get this Rock On Ruby Camp & Proud Art Print – A4 – Print Only from My Geek Box UK.

Through the use of doodles & empowering slogans, Rock On Ruby allows you to bring out your inner sass and take on the world with positive vibes. Hand drawn with love in the UK. Grab one of our outstanding Giclee prints today, produced on 300 gsm premium soft cotton paper, these prints are of the highest quality. Our prints come hand rolled to ensure quality is maintained in the finished product, ready for display in a room or location of your choosing. These digital prints are produced on high-quality art paper with a fine detail digital print to give incredible clarity and finish in the final design.Features:Printed on 300gsm High-quality Art PaperAvailable in A4, A3 and A2 sizesMagnetic Hanger Frames and Full Frames availableFrames come with a clear perspex cover to protect your chosen art print. 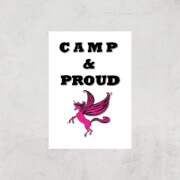 You should definitely try our to generate a Sound Wave Art of Rock On Ruby on Soundviz.com!

The Rock On Ruby Series (wiki)