You can also get it on Amazon at this link and get your own GB Eye custom art by using a Sound Wave Generator from SoundViz.

This Soundorabilia Fancy Dresses item will be delivered to your door Worldwide from UK. Get this Rick and Morty Cast Mini Poster 40 x 50cm from My Geek Box UK.

Still the cornerstone of our product range are posters. Our selection of Rick And Morty Mini Posters is huge and you’ll be sure to find something to complete the look you are going for in any chosen living space. Measuring 40x50cm and printed on 180gsm paper our Mini Posters only use the highest resolution artwork meaning a crystal clear image every time! Why not pair up with one of our coloured mini poster frame to really finish off the look? Mini Poster 40x50cm | 16x20inches High Resolution Artwork Printed On 150gsm Paper Hang On Your Walls With Pride 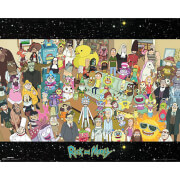 You should definitely try our to generate a Sound Wave Art of GB Eye on Soundviz.com!