This Soundorabilia Fancy Dresses item will be delivered to your door Worldwide from UK. Get this PlanetA444 Attract What You Expect Art Print – A3 – Print Only from My Geek Box UK.

PlanetA444 Attract What You Expect Art Print – A3 – Print Only 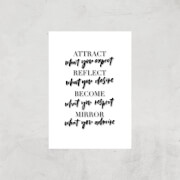