This Soundorabilia Fancy Dresses item will be delivered to your door Worldwide from UK. Get this Nintendo Super Mario Silhouette Art Print – A4 – Print Only from My Geek Box UK.

Mario himself, possibly the most famous videogame character ever to have existed, shown here in an incredible silhouette-style art print!Add a touch of classic videogame style to any room with these amazing Official Nintendo print designs! From Mario to Link, there is something for every style and location!Grab one of our outstanding Giclee prints today, produced on 300 gsm premium soft cotton paper, these prints are of the highest quality. Our prints come hand rolled to ensure quality is maintained in the finished product, ready for display in a room or location of your choosing. These digital prints are produced on high-quality art paper with a fine detail digital print to give incredible clarity and finish in the final design.Features:Printed on 300gsm High-quality Art PaperAvailable in A4, A3 and A2 sizesMagnetic Hanger Frames and Full Frames availableFrames come with a clear perspex cover to protect your chosen art print. 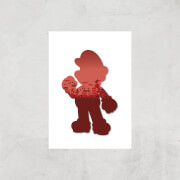