King of Hearts Ceramic Mug at My Geek Box UK

This Soundorabilia Fancy Dresses item will be delivered to your door Worldwide from UK. Get this King of Hearts Ceramic Mug from My Geek Box UK.

Show your other half he is the king of your heart with this fun mug on Valentine’s Day. The white mug features a white mug with a pink heart and a ‘K’ that is sure to brighten up his daily cuppa. Features: King of Hearts Mug White ceramic mug Fully dishwasher and microwave safe Size: Capacity: 300ml 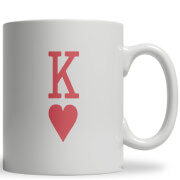