This Soundorabilia Fancy Dresses item will be delivered to your door Worldwide from UK. Get this Happier Than A Unicorn Eating Cake Mug from My Geek Box UK.

Lovingly created with magic and fantasy in mind, this 10oz mug is the perfect way to liven up your coffee break. Sit back, relax and sip away with your favourite mystical steed. Dishwasher and Microwaveable safe, this magic is going nowhere. 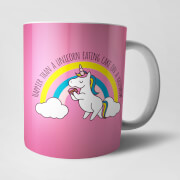