You can also get it on Amazon at this link and get your own Sharks custom art by using a Sound Wave Generator from SoundViz.

This Soundorabilia Fancy Dresses item will be delivered to your door Worldwide from UK. Get this Great White Happy Meal Mug from My Geek Box UK.

This ceramic mug has a capacity of 315ml / 10oz and is dishwasher and microwave safe. Presented in a secure box, this mug is a great gift idea. 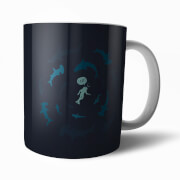 You should definitely try our to generate a Sound Wave Art of Sharks on Soundviz.com!