You can also get it on Amazon at this link and get your own Friends custom art by using a Sound Wave Generator from SoundViz.

This Soundorabilia Fancy Dresses item will be delivered to your door Worldwide from UK. Get this Friends The Chick And The Duck Mug from My Geek Box UK.

Friends The Chick And The Duck Mug

The adopted children of Joey and Chandler, the chick and the duck became a dunning part of the show for many episodes, causing mayhem whenever they were involved. The chick even got stuck in the VCR once. Show them some love with this retro design. F.R.I.E.N.D.S. is what is known as a cult classic. So firmly ingrained into TV culture that there probably aren’t many who wouldn’t know about it. So sit back and enjoy, and be sure to pick up some official merchandise!This ceramic mug has a capacity of 315ml / 10oz and is dishwasher and microwave safe. Presented in a secure box, this mug is a great gift idea. 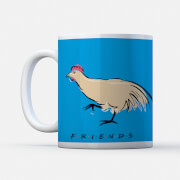 You should definitely try our to generate a Sound Wave Art of Friends on Soundviz.com!