Brunch And Beaches Mug at My Geek Box UK

This Soundorabilia Fancy Dresses item will be delivered to your door Worldwide from UK. Get this Brunch And Beaches Mug from My Geek Box UK.

This ceramic mug has a capacity of 315ml / 11oz and is dishwasher and microwave safe. Presented in a secure box, this mug is a great gift idea.Fitness fanatics and sofa surfers can all agree on one thing; comfort is key! Whatever you’re doing make sure you do it in our essential fitness and loungewear collection. If it’s smashing out that spin class or popping down to the shops, you’ll find something here that makes the perfect addition to any wardrobe. 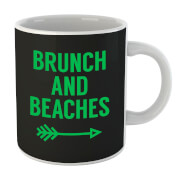