This Soundorabilia Fancy Dresses item will be delivered to your door Worldwide from UK. Get this Alphabet Ceramic Mug – Letter N from My Geek Box UK.

A 10oz ceramic mug. All our mugs are despatched in sturdy cardboard to prevent damage and are printed using high resolution artwork using heat resistant transfers. Fully dishwasher safe. A fantastic mug to liven up your coffee break! Produced in the UK to the highest possible standard. Microwave safe – 10foz capacity. Packed in a sturdy box to arrive in perfect condition. 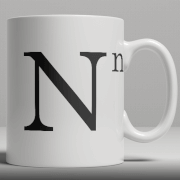