99% Mermaid 1% Unicorn Chopping Board at My Geek Box UK

This Soundorabilia Fancy Dresses item will be delivered to your door Worldwide from UK. Get this 99% Mermaid 1% Unicorn Chopping Board from My Geek Box UK. 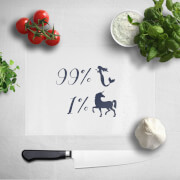